Steeped in history, Budapest is an exotic city with a rich past. Known for its hot baths and turn of the century architecture, Budapest is often called “little Paris of Middle Europe”. The city not only preserves its own 1000 years of culture, but is also the relics of myriad others cultures that found their way here. On arrival, you will be met with our local representative at the airport, outside the customs area. After your pick up from the airport, you will proceed to a carefully chosen Indian restaurant for dinner. After the dinner, you will check in to the hotel

Overnight stay at the hotel in Budapest. (Dinner) 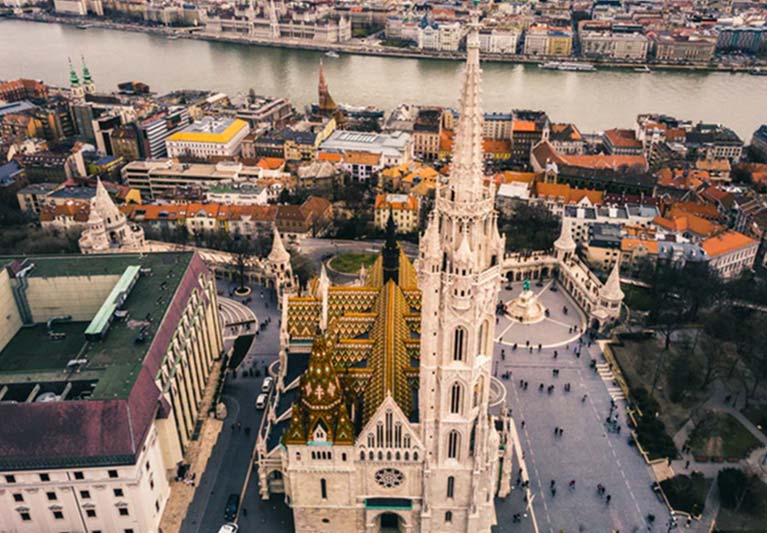 After a hearty breakfast at the hotel, we will leave for excursion to explore Tahitotfalu, ending with Bodor Major Show. Tahitotfalu is a beautiful, rustic village at the foothills of Visegrad Mountain. We will explore the delights this place has to offer. The landscapes include amazing groves, marshes and even dunes formed by the wind. We will also be a witness to the fabulous Bodor Major Show, guaranteed to give you a super fun experience. Set in the magical backdrop of a beautiful landscape, the Bodor shows the folklore and the talents of this land in an atmosphere of bonhomie. There are two shows here, of 45 minutes each. The first one, The Wrangler Show, is delightful show revolving around horses, ...the impeccable skills of the riders and the horses, and even some games involving the spectators. The second show, The Time Traveller, showcases the rich history of the place, where again the horses played a rich part in the country’s heritage.

After this eventful tour, we will proceed for the Budapest City tour. Remains of the Roman occupation and later, of Turkish occupation can be seen throughout the city. The influence of the union of the city with Austria after the Ottoman Empire can also be seen in the buildings and architecture here. Pass by the Parliament for an outside view, stop in the Castle District for an outside view, Matthias Church for an outside view and Fishermen’s Bastion. We will later stop at Gellért Hill (Citadel), which boasts of the most outstanding view of Budapest. We will visit Central Market Hall, the largest Synagogue of Europe. We will also stop by the Heroes’ Square, after which we will take the Andrassy Avenue; pass by the Opera House and the St Stephen’s Basilica. Further proceed for 1 hour Danube River cruise. The city has two sides- Buda and Pest, both of them along the River Danube, representing two very different aspects of the city. This tour will showcase many interesting aspects of the city. Later return to the hotel after having Dinner at Indian Restaurant.

Overnight stay at the hotel in Budapest. (Breakfast + Dinner)

After a sumptuous breakfast to kick start the day, we will leave for Bratislava- the capital of Slovakia. It also happens to be the biggest city of this country. On arrival, begin with the Orientation tour of this town which will give a distinct vibe of a medieval city, with narrow, cobble streets, myriad historic churches and buildings, and a castle atop a hill. Also visit the famous landmarks like- the Cathedral of St. Martin, the Town Hall, the Opera House & much more.

Later, we get back on the road and drive to Prague.... Aptly known as “Jewel in the Crown” of central Europe, Prague stands by the Vltava River. This marvelously beautiful cityscape has been enthralling generations of poets, painters, photographers and artistes. The city is characterized by the one hundred spires and the innumerable ornate buildings of the Renaissance era. On arrival, proceed to a carefully chosen Indian restaurant for dinner. After the dinner, you will check in to the hotel.

Overnight stay at the hotel in Prague. (Breakfast + Dinner)

After a superb continental breakfast, we will proceed to touring the splendid city starting with the Circle B - The entrance to the Castle area where we will get to view the Old Royal Palace. The Old Royal Palace was the seat of Czech rulers. First built in the 12th century it was rebuilt again and again over the years, making it a unique fusion of several architectural styles from the gothic to the renaissance era. The Vladislav Hall at the Prague Castle is one of the most significant representation halls in the city.

... Next up is the pristine St. George Basilica Palace - the most ancient building in the Prague Castle, which also happens to be one of the most well preserved churches of the Roman era. Founded by Prince Vratislav in AD 920, the cathedral was expanded in AD 973 when the convent of St. George’s Benedictine was built and rebuilt again in 1142 post a fire. The Baroque façade was added in 1671 to 1691.

Later in the day, we will visit the gorgeous St Vitus Cathedral Palace. The unique feature of this building is that you will be able to spot it from anywhere in the city. A gothic masterpiece and the spiritual symbol of the Czech state, the cathedral was commissioned by Charles IV. After having Dinner at Indian Restaurant, return to your hotel.

Overnight stay at the hotel in Prague. (Breakfast + Dinner) 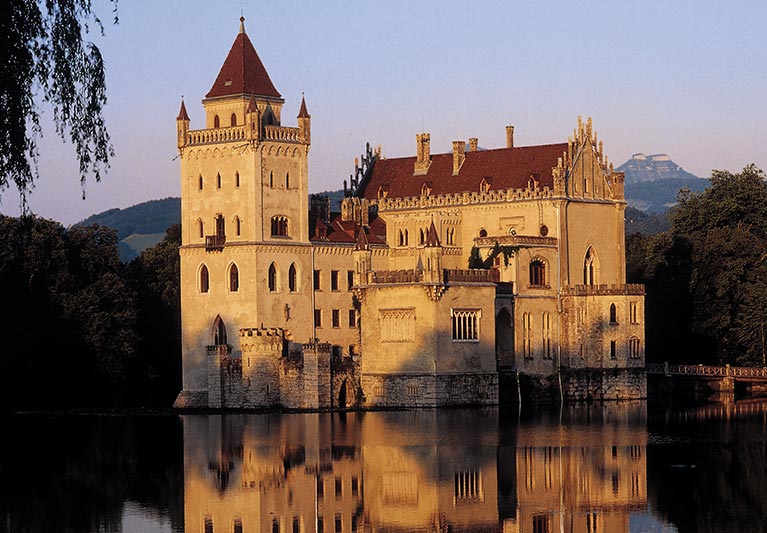 Commence your day with a scrumptious breakfast at the hotel. Later, we check out from the hotel and continue our journey to Salzburg which sits pretty at the Austria - Germany border and welcomes you with the most spectacular views of the mighty Eastern Alps. The River Salzach runs through the city and divides it into two parts- the old and the new. The old part of Salzburg, also known as Altstad depicts the medieval and the baroque times that the city had witnessed while the Neustadt, or the New City showcases a completely different picture- with modern buildings and chic cafes.

... On arrival, proceed for City tour of Salzburg to get acquainted with the city well. The Baroue influence on Salzburg is impossible to miss - famous for being Mozart’s city and the very city where the iconic movie - The Sound of Music was shot and based. Every nook and cranny in Salzburg is worth stopping and looking at. The city is bustling with students who study at the three most famous Austrian universities in Europe. The students add to the liveliness and the effervescence of this city which will automatically keep you charged up all day long. This tour will let you drive around the city where you will get an opportunity to witness some of the most fantastic Baroque architecture, which will transport you to a different era altogether.

After spending the day exploring Salzburg, you will head to an Indian restaurant where we have arranged for a lovely dinner for you. After the dinner, we will head to the hotel and check in. Once checked in, call it a night and relax.

Overnight stay at the hotel in Salzburg. (Breakfast + Dinner) 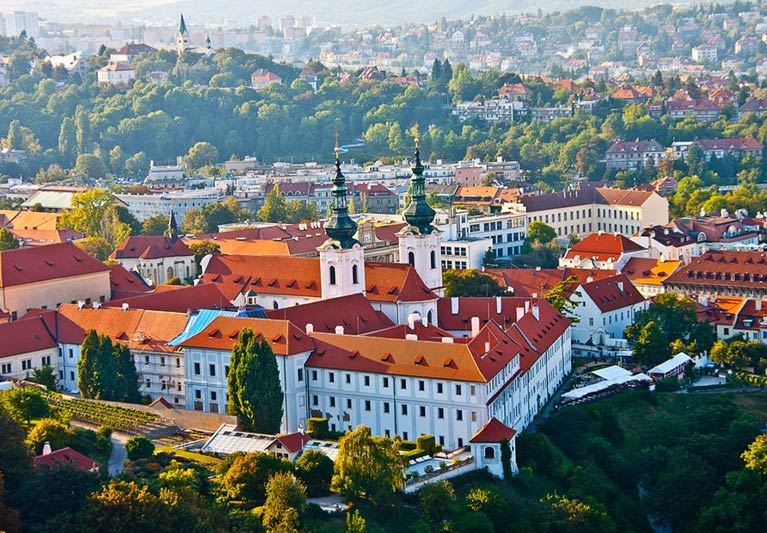 Start your day with an energizing breakfast and get ready for another adventure. Upon checking out from the hotel, we will start our journey to the beautiful city of Vienna- the Capital of Austria.
While on our way to Vienna, we will make a stop at a Cesky Krumlov. A site protected by UNESCO, this is a quaint place with cobbled streets lined with Baroque, Gothic and Renaissance houses, a delectably old castle and numerous charming little cafes and shops. After a walking tour of the town, we will have some free time on our hands to relax in the many cafes lining the cobbled streets, or shop a little, or even take a small walk by the beautiful river winding down nearby.

... Later, we get back on the road and continue our drive to Vienna. Steeped in history, Vienna boasts of beautiful buildings and architecture from the bygone era. On arrival, proceed to a carefully chosen Indian restaurant for dinner. After the dinner, you will check in to the hotel.

Overnight stay at the hotel in Vienna. (Breakfast + Dinner) 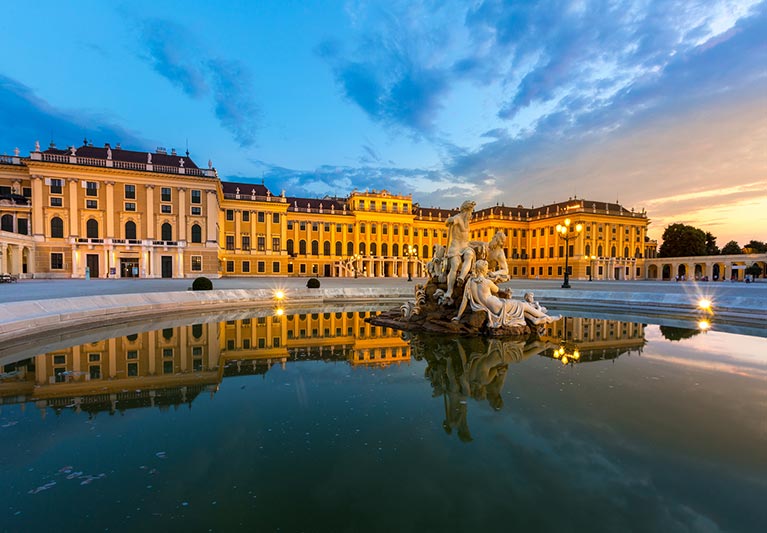 After a brilliant continental breakfast, we will visit the Vienna Woods, where the Viennese royalty used to go for hunting. Through the moderately dense forests along the Danube River in the north of the city, the Viennese woods excursion tour begins at the gently forested uplands which extend upto the foothills of the Austrian Alps.

The exploration tour will lead us to on the other side of the Viennese woods to an underground cave system of a former gypsum mine. ...This area was blasted through 1848 to 1912 to extract gypsum, but one explosion too many to dig deeper in the mine caused flooding of the mines - slow and steady influx of water nearly 20 million liters of water fill the base of the caverns. We will spend some time in this amazingly attractive spot and marvel at the beauty of the amalgamation of its man-made caverns with nature.

After a scrumptious meal of your own choosing at the many restaurants lining the streets (at your own expense), proceed for the city tour of this brilliant, quaint city. We will visit the magnificent Schönbrunn Palace - along with its neighboring buildings and the huge and beautifully manicured park adjacent to it makes it one of the most sought after cultural monuments of the country. No wonder it is a UNESCO World Cultural Heritage site. Later return to hotel after having Dinner at Indian Restaurant.

Overnight stay at the hotel in Vienna. (Breakfast + Dinner)

After a continental breakfast, we will check out from the hotel and drive to Airport from where we will board our flight back to our home! It is time to say goodbye to the beautiful, pristine Europe, the friends we have made, and go back home with the indelible memories we have created. With the memories, experiences and photographs of a lifetime, this Euro trip will draw to an end. We would love to hear your stories and your feedback. Please write to us with anything you would want to share with us, as this keeps us motivated in our effort to provide beautiful holiday experiences to our guests. (Breakfast)

Terms & Conditions: Discount being offered shall be adjusted at the time of final payment from the total amount of the package being booked by you. *Offers valid for limited period, limited seats and are subject to change without prior notice. All rates on twin share per person basis else specified. All Tours & Transfers on Seat In Coach (Shared) Basis. The cost of outbound package tour is payable in convertible foreign exchange (subject to RBI/GOI regulation) except cost of ticket. *Conditions Apply. All claims, disputes and litigation relating to online booking through this website anywhere from India or abroad shall be subject to jurisdiction of Courts of Delhi only.